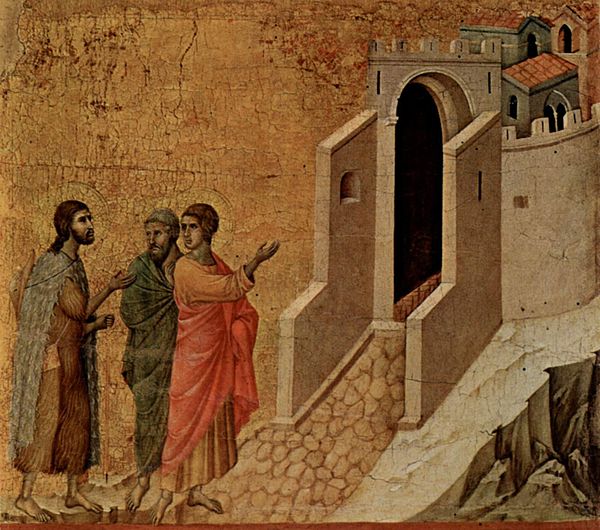 When we think of homiletics or homily, we think of a pastor preaching to the congregation while the audience quietly sits there. It is only a one-way interaction between the preacher and the masses. But, is that what homiletics should be?

Homiletics is widely considered the art and practice of preaching.

âThe discussion of the art and theology of preaching.â
https://www.biblicaltraining.org/library/homiletics

âthe art of preaching; the branch of practical theology that treats of homilies or sermons.â
https://www.dictionary.com/browse/homiletics

Preach in the Greek is kÄryssÅ.

The word is used when the two men on the Emmaus road was talking and communing with Jesus.

[Luk 24:13-15 KJV] 13 And, behold, two of them went that same day to a village called Emmaus, which was from Jerusalem [about] threescore furlongs. 14 And they talked (homileÅ) together of all these things which had happened. 15 And it came to pass, that, while they communed [together] (homileÅ) and reasoned, Jesus himself drew near, and went with them.

It is used when Paul talked all through the night at Troas.

[Act 20:9-11 KJV] 9 And there sat in a window a certain young man named Eutychus, being fallen into a deep sleep: and as Paul was long preaching (dialegomai), he sunk down with sleep, and fell down from the third loft, and was taken up dead. 10 And Paul went down, and fell on him, and embracing [him] said, Trouble not yourselves; for his life is in him. 11 When he therefore was come up again, and had broken bread, and eaten, and talked (homileÅ) a long while, even till break of day, so he departed.

Earlier, Paul was preaching for such a long time that a listener fell asleep (and died!). So, Paul switched gears and instead of dialegomai, he homileÅ for the rest of the night until morning.

The other use of homileÅ was when Felix communed with Paul and discussed about the scriptures.

[Act 24:24-27 KJV] 24 And after certain days, when Felix came with his wife Drusilla, which was a Jewess, he sent for Paul, and heard him concerning the faith in Christ. 25 And as he reasoned of righteousness, temperance, and judgment to come, Felix trembled, and answered, Go thy way for this time; when I have a convenient season, I will call for thee. 26 He hoped also that money should have been given him of Paul, that he might loose him: wherefore he sent for him the oftener, and communed (homileÅ) with him. 27 But after two years Porcius Festus came into Felix' room: and Felix, willing to shew the Jews a pleasure, left Paul bound.

HomileÅ is a having a deep conversation between people that causes the participants to know more about God and the scriptures.

When the two men on the road to Emmaus reflected back on their homileÅ with Jesus, they said their hearts burned within them.

[Luk 24:32 KJV] 32 And they said one to another, Did not our heart burn within us, while he talked with us by the way, and while he opened to us the scriptures?

We would mysteriously commune with Jesus. Just as we donât know how Jesus would commune with us, the two men did not know Jesus was the one actually talking with them.

We would be lost in time when we engage in homileÅ. Paul had homileÅ from midnight til sunrise. The two men walked with Jesus and had gone through all the scriptures about the fulfillment of prophecy and then also had him over for dinner.

In preaching, only the speaker is the authority and everyone else listens.
In homiletics, everyone is equal and can contribute and there is a discussion.

In preaching, the main goal is imparting knowledge.
In homiletics, the goals are knowledge and a communion of the participants.

Have you ever had a time when you were discussing about God with another person and both of you gained new insights and also your hearts were warmed? It was then you had experienced true homiletics.